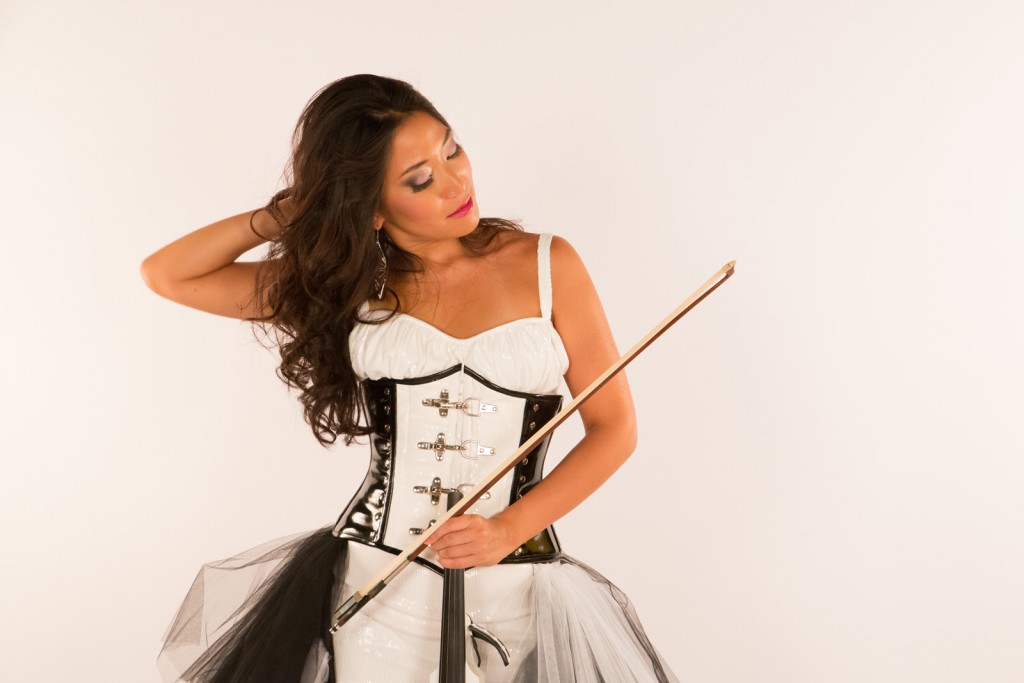 I was one of those kids who was always in her dream world. Spaced out most of the time and my reflex was slow as  a snail. My mom tried everything from making me learn ballet ,craft, piano to wake me up a bit. But unfortunately nothing worked. Even with piano , I  would never learn a single  note. I was officially labelled as a slow kid.

My family moved to Texas when I was 7 years old and I kept struggling also with the new language on top. All I could do was nod or shake my head or shrug for the next 2 years.

Then one day when I was 8 years old, god had illuminated me.

I tagged along with my best friend to her violin class. At that moment, I knew that I wanted to be a violinist.

I knew in my heart that it was my destiny and this was what I was born to do. I remember, burring a time capsule under a yard tree when I was 9 years old with a friend. It was written “I want to be a great violinist” Even now my hearts desire  hasn’t changed. I worked very hard and advanced as a violinist very quickly. Everything was going well until we had to move back to my home country , Japan.

I was a teenager at that time and I had  hit another big wall. My parents didn’t want me to continue the violin because it was expensive and they were concerned about my studies  as  I was very behind in my academic studies and my  mother tongue, Japanese.

Also my violin teacher at that time had totally destroyed my self-esteem telling me that I sucked at playing the violin . To top that up, I was being bullied at school and my house was a mess with domestic violence .

I stopped playing violin completely  from emotional stress and  knew that I needed to get out of the country . Far far away from all this. Just me and my violin.

How with no money?

I applied for scholarship for university to study music,  packed my bags,  and bought a one way ticket.

To my luck, the university had shut down the music course when I had arrived because there were`t enough students. My face turned white. There was no turning back. So I decided to take Performing Arts which was the nearest music related  course I could find. The performing Arts course was 3years without playing much of my violin.

One christmas holiday , I went home to Japan to see my parents . On my way back , at the airport, I was waiting around for my bus to go back to my university. There was 2 hours of waiting time and I was walking around the airport with  my violin on my shoulder. Then out of nowhere, a funny looking man appeared.

He was short and skinny and  almost bold .To describe him, he looks like Robert Benigni from “Life is Beautiful”.

He started following me around . At one moment , I turned to confront him to ask what he wanted.

He replied “ I want to see your violin. Can you show it to me ?”

I said “ No” thinking he might steal it. But then, after all it was inside the airport. He can’t go anywhere without being caught

He had this excited grin on his face.

When I showed him the violin, he wanted me to play him something. I confidently , to show off, began playing  Mozart concert for violin N.3

He listened in a serious expression.

When I was done, he said “ very good . but if you correct this and this technique, it will be easier” I looked at him with a surprise. Only a knowledgeable violinist would know about this things.

He shyly asked me “ If he could play my violin”

When he played my violin, I couldn`t believe my ears. He played one of the most difficult violin piece Sebilius in perfection.

I immediately asked if I could take lessons from him. He said “ I can`t teach you because I don`t live here. I’m waiting for my connection flight. But if you want to become a great violinist, go to Russia. That`s where all the secrets are”  I sadly had to say good bye to him.

Two years later , after graduating, I moved to London. Still dreaming of becoming a great violinist. I knew it was too late becoming a great classical violinist. My technique wasn’t very good anymore having stopped playing the violin at university. I was desperately looking for a way to get back into shape and make a career out of my violin.

My parents told me to stop dreaming and get a serious job.  Yet, I couldn’t give up my dream to play the violin.

Every night I would go to the corner of Covent Garden street , London where all the street actors are and open my case and play my violin. After a week has passed, one night, there was a skinny short man, listening to me from a distance.

He came closer and closer and said “ If you correct this and this , you will play better“ I was again surprised , because only a violinist would have this kind of knowledge. I immediately asked if he could teach me. I asked him where he is from.  He didn’t want to tell me . I asked for his number.

He didn’t have one. I asked for his name, he didn’t want to tell me . He said I could call him “ Maxwell” As for teaching , he said it`s difficult because he does`t live in London.  But he can introduce me to a Russian teacher in Russia.

But he hesitated after seeing how much I wanted to play the violin in my big sparkling eyes. He said “ You must be very careful. Violin is like a drug and you have to treat it very carefully.

As I closed my eyes in bed yawning, it suddenly occurred me that it`s the same man I`ve me two years ago at the airport……!

Like a peculiar fantasy dream, this is how my journey begun  as a violinist.

This mysterious man that appeared and disappeared  many times in my life as if he were a magician, running into him on the street without planning…The crazy strict classes from 10 to 9pm every day in an abandoned house .

He was a man who was passionate about violin, politics but was afraid of people.

One day suddenly he didn’t show up for the class  after four months of class every single day. It was the  same day as the London terrorist attack .

My heart pounded quickly not knowing where he was or how to contact him. To my grief, after few days he`d returned again.

Nowdays I still don`t know his real name or his nationality… The secret remains unrevealed but I`m more than thankful for what he has given me.

View all posts by Admin →